Friends and I enjoyed an absolutely fantastic closing night concert from Jools Holland and his Rhythm & Blues Orchestra at the Llangollen International Eisteddfod on Sunday. 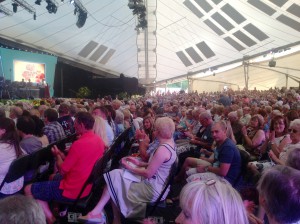 But my enjoyment was marred somewhat by my near eviction from the arena by a humourless security steward after I had been physically manhandled and screamed at by one of the Festival’s flower committee! Yes! Really!

Now I confess I was the architect of my own downfall. In my exuberance, when the Queen of Boogie Woogie, Ruby Turner, ended her truly awesome final number bringing the concert to a barnstorming close, I plucked a lily and a carnation from the literally thousands of flowers on display at the front of the stage and tossed them onto the stage at her feet. What happened next was quite extraordinary.

Suddenly from my right I was gripped and physically shaken by a screaming dervish of a woman. Her face contorted with contempt and loathing, she hollered at me: “How dare you… how DARE you touch my flowers, what DO YOU THINK YOU’RE DOING!” My jaw dropped at the ferocity of this woman’s ire. I laughed weakly and said: “Oh for goodness sake it’s the last night, there’s only the encore left. It was only two flowers!”

At this, she shook me even more vigorously and attempted to wrest the jolly pink blow up saxophone I had been waving throughout the gig from my grasp screaming “IF YOU TOUCH ONE OF MY FLOWERS AGAIN I AM GOING TO TAKE THIS THING AND BURST IT…HOW WOULD YOU LIKE THAT HUH?! HOW WOULD YOU LIKE THAT?!”

At this point, in a well-timed pincer movement, a security guard came at me from the left. Forcefully jabbing his index finger into my stomach he barked: “Right you – OUT! OUT NOW!” Having recovered my equilibrium following the psychotic flower lady’s assault, and in anticipation of the enthusiastic encore I knew was coming, I politely declined to leave and equally nicely requested he refrained from poking me again.

Undeterred and clearly on a mission to justify the lanyard hanging from his neck, he ordered menacingly “Right, get back to your seat NOW! If you don’t behave yourself and go back to your seat RIGHT NOW YOU’RE OUT!”

My jolly little pink sax in hand, I had no option but to troop back from whence I came. Saxophonists Phil Veacock and Lisa Grahame – with whom I’ve enjoyed post gig drinks in the past – shot me a bewildered sympathetic glance as they left the stage.

Sourface security escorted me along the aisle in front of the stage past a long row of dignitaries, including distinguished Eisteddfod President and peace activist Mr. Terry Waite, and deposited me at the left hand side of the stage. Here I was met by an enthusiastic band of happy little boppers. “Is he throwing you out?,” they asked in disbelief. “He wants to but I’m not going!” I declared defiantly. They instantly formed a sort of informal protective huddle around me in a sub-conscious act of giggers solidarity. I would live to dance again.

By now the band had returned for their encore. I bopped obediently at the side of the stage to the first number, my mojo instantly returning. Sourface repeatedly glanced over his shoulder, presumably to check I was “behaving”. As the band struck up the next number, and with surly security man’s attention on me waning, I raced around the middle walkway of the seating area at the front, down the middle aisle and reassumed my position in front of the stage next to my dancing chum Kate. At this point a very nice lady beamed at me: “Oh! You escaped then? Don’t worry about her,” she said gesturing in psychotic flower lady’s direction, “She’s on the flower committee… they’re all witches… it’s no wonder they can’t recruit the next generation of flower helpers when they’re like that!”

The psychotic flower lady and surly security man episode marred what was probably the best of the four Jools Holland Band gigs I’ve had the great pleasure of attending… and at least it has given me a cracking story to dine out on for a couple of years. Can you imagine… thrown out of the Llangollen International Eisteddfod arena for “misbehaving”… aged 54?! I’d happily have that as my epitaph.

And before you ask … no I wasn’t squiffy. I’d had two glasses of white wine. But I was drunk from the amazing concert atmosphere, the foot stomping tunes of my all time favourite band and the breathtaking belting vocals from Boogie Queen Ruby Turner.

Happily, despite the rough manhandling from flower witch and sourface my faith in humanity was almost instantly restored in the car park field. As my chum Kate and I searched in vain for the courtesy car we’d arrived in – I’d forgotten the make and model, had no clue of the registration number, the car’s shape or where we’d actually parked it – a lovely couple offered us the use of their mobile phone to call the husband I’d also forgotten. We were supposed to meet back at our seats post concert.

They were completely delightful. We quickly learned they were from Liverpool, swapped the stories of our weekend and chatted and laughed happily for 20 minutes with these complete strangers. The lady intermittently called my husband’s mobile without success, until out of the darkness a familiar burly shadow appeared. It turned out we were standing three feet away from the car and the couple to whom we were chatting were parked right next to us.

We waved them a cheery goodbye, grateful that we had been sprinkled in that invisible magic dust that radiates from genuinely kind and warm-hearted people. What a difference 20 minutes makes.

As a footnote, I have emailed an apology to the Eisteddfod Director, and sent a cheque to the value of one carnation and one lily with a generous donation in appreciation of a usually wonderful event on top. I queried whether he might take this opportunity to devote some of the +44% rise in profits he rightfully boasted of on Monday towards some much needed customer service training for his stewards. The delightful young Year 8 student at Ysgol Dinas Bran who showed us to our seats on Sunday could certainly teach them a thing or two about poise and charm and these youngsters generate great PR for their school and the Eisteddfod each year.

I know the Llangollen International Eisteddfod well. I’ve visited on many occasions and for several years we were a host family for overseas performers. I know from experience that for some of these pompous over-officious lanyard bearers and flower ladies it’s actually all about them and their experience, not the paying customers’.

I also let the Director know that we had spent in excess of £130 hard-earned moolah on the night in the form of concert tickets, meals and drinks for ourselves and friends.

I mused that perhaps he might remind his Eisteddfod stewards and flower ladies about properly valuing the Festival’s customers and that perhaps some carefully targeted training in best practice management of  over-exuberant middle aged women might be helpful.

Because actually, all that was really needed in the very last gasps of a triumphant Festival was for the flower lady to simply stroll over and whisper politely in my ear, “Excuse me, but we’ll be selling these flowers straight after the concert so I would be really grateful if you didn’t throw any more. Thank you.” Delivered with a broad smile and a cheery wink of course. Instead, the stratospheric over-reaction has further cemented the flower committee’s poor reputation as a clique who are flower power crazy.