Confession 1: I’m not a huge fan of Olympic sports. I like cricket quite a lot – and I enjoy watching a spot of golf. Neither sadly, are Olympic sports. Athletics, to be brutally frank, I find a bit of a bore. Usain Bolt? Well sorry, but what’s the point of getting all excited over something that lasts 9 seconds(ish)? If it was an orgasm fair enough. But a bloke running the distance from my house to the post box? Nah. 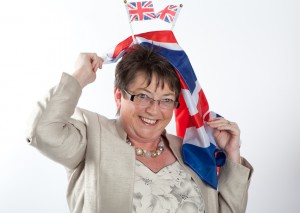 London 2012 – An oasis of red, white and blue amidst 50 shades of relentless grey!

Confession 2: I’m not a huge fan of the Queen. I like it when she’s present at a gig and Prince Charles addresses the gathered royalists with a speech that starts: “Your Majesty…[pause for comic effect] …Mummy…” [cue gales of laughter from said subjects]. But that’s because it is amusing to see a grown man of 60+ still calling his mother “Mummy”.

Confession 3: I’m not a huge fan of the glorification of war, death and destruction and human misery on a grand scale. Hey, who is? Okay, Genghis Khan, Adolf Hitler, Saddam and their like. But apart from them?

So answer me this. Why over the past two months, have I gone all Union flag-waving bonkers?

An Olympics cynic, I nonetheless popped into my local town when the Olympic Torch passed through and had, genuinely, one of the most spiritually uplifting mornings of my entire life.

High on bonhomie, I draped myself in the Union flag and cheerfully had my photo taken chumming up to the local vicar, and another with our local Conservative MP. Trust me; these are not folks with whom I am spiritually or ideologically aligned. But there I am, grinning like a Cheshire cat – all red, white and blue of me.

Only days later I grudgingly attended our local pub’s Diamond Jubilee street party – only went because I am biologically unable to pass by a home-made cupcake – but I had such a wonderful time amidst the buns and bunting I stayed all day and ended up with one of the most spectacular hangovers ever in what has in all honesty, been quite an impressive history of hangovers.

And then just last week, in a blitz of guilt at what a rubbish daughter-in-law I am to my 87 year-old ex-RAF father-in-law, I booked us both tickets to RAF Cosford’s Proms concert in aid of the RAF Benevolent Fund. Mid jollies, an iconic WWII Battle of Britain Spitfire flew overhead, making several sweeping passes over the crowds below, to the orchestral strains of The Dambusters.

Blow me, I found myself leaping from my seat whooping and waving my little union flag on a stick with more gusto than a WRAF Lieutenant  in Trafalgar Square on VE Day. As the little plane roared past for the final time, bidding the appreciative crowds below a jaunty farewell with a little waggle of its wings, I wept. I didn’t really know why. Tears tumbled down my cheeks. That Cheshire cat grin was back though, ear to ear.

On reflection, I think it’s a people thing. A solidarity thing.  A, dare I say it,  ‘we’re all in this together’ thing. Oh, yes Mr. Osborne, we are indeed, all in it together. Only to paraphrase Orwell, some are way more in it than others.

Post 2008 financial crisis, recession-hit Britain is a tough place to be for very many people poleaxed by the Chancellor’s deficit reduction programme, sans growth strategy. Futures cruelly uncertain and angst-ridden. Our great institutions – Parliament, Whitehall, the City, Fleet Street, the Met, variously crumbling, bumbling, corrupt and inept. We’re ruled by uncaring incompetents; fettered by morally bankrupt banksters. And the world teeters on the brink of another catastrophic financial implosion because the Euro project is all just too damn complicated to unravel.

So why the flag waving?

Honestly? I think like many I’m just a bit desperate for some joy. An oasis of red, white and blue amid fifty shades of relentless friggin’ grey.

The London 2012 Olympics has appeared like a colourful little kumquat perched atop the grey gruel of life.