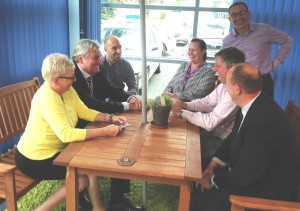 Jools said: “We are working co-operatively to urgently ‘design’ a model cohesive and co-ordinated response to welcoming Syrian refugee families in Oswestry. Our aim is to do it in a way that works successfully for both the families and the wider community. My role is to encourage the business people of Oswestry to play a key part in making that happen.

“As Chair of Oswestry Chamber I’ll be taking the lead in encouraging the town’s business community to work in partnership with ip&e. Our first step is to gather a network of well connected business professionals willing to volunteer as a ‘one point of contact’ mentor to refugee families when they arrive and then utilise their contacts for further help where needed.

“I’m delighted to be first to pledge my support for that effort. Now I’m seeking practicing or recently retired solicitors from local law firms who are ideally placed to offer valuable assistance as well as local property agents who may be aware of private sector landlords willing to help with short-term housing.

“Shropshire Council, as we are well aware, is clunky, cash strapped and constrained by process, which makes rapid pragmatic action difficult. The innovation team at ip&e however, is much more flexible, agile and able to take meaningful action based on a wealth of public sector and cross agency partnership working expertise, and designing imaginative solutions alongside communities.”

Jools added: “I’m eager to hear from absolutely anyone in business in Oswestry who is keen to help in whatever capacity, and however modest, but who isn’t sure just what that help might look like at this stage. This is an on-going project but we are on the cusp of designing something really worthwhile and imaginative.”

Jools is leading an Oswestry Welcomes Refugees event on Saturday 12th September (10-1pm) aimed at harnessing the huge amount of goodwill that exists in the community amongst those desperate to help Syrian families in whatever way people feel able. The ip&e team will be on hand to offer accurate information to assuage local people’s entirely valid concerns and will distribute ‘myth buster’ leaflets to counter negative perceptions and inaccuracies around refugee asylum seekers from Syria.